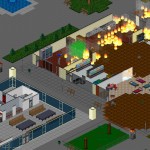 JOIN THE BEDLAM!!! and be amongst the first to get Bedlam Basin news, screenshots and videos!

Bedlam Basin is an upcoming strategy/tactical game produced by Peloton Games, an Australian independent games developer. Being in part-time development since early 2014, Bedlam Basin was revealed publicly in April 2015 once development had progressed enough to adequately demonstrate the game’s core elements & functionality, and to prove the sincere commitment of the game’s on-going development.

A nostalgic throwback to 1990s strategy gaming, Bedlam Basin puts players in control of a number of tactical-response police officers, who must work through an on-going series of escalating events, conducting tactical operations and strategically managing resources.

Gameplay primarily takes place in an isometric world, through a variety of predetermined & randomly-generated urban environments and biomes, with a choice of real-time action or turn-based strategy modes. The player controls a number of agents, who must complete specific mission objectives to further progress in the game. To accomplish this, an arsenal of weaponry and items are offered for each agent’s usage, all having realistic and potentially destructive effects on the environment. In addition, further gameplay takes place within a strategic management area where missions are planned, resources are utilised and agents organised.

Bedlam Basin brings together many new and existing concepts into a unique strategy game experience. The game’s features, a number of which have already been produced and are demonstrable, include:

Well into development, it is anticipated that Bedlam Basin will be released in 2016 for Windows and possibly other platforms.